Dave and I went toddling off on a research trip this weekend...

We cruised the Southern Tier...  Checked out the lakes of Western New York... Fell in love with several for different reasons!

Here's a map-view to give you an idea of location:

That's Chautauqua Lake in the center. Now it looks SMALL compared to Lake Erie above, right??? Which is why I had to go researching because I live near Lake Ontario and when you live on the Great Lakes, these other things are kind of like farm ponds, you know? But learning riparian culture.... Seeing what's needed and useful in a lakeside town during the summer season... and post-season... that's huge because it's truly different from my day-to-day existence.

We went to church in Bemus Point.... Stopped by Webbs (a must-do for awesome candies!!) We did not stop at the amazing quilt show being held at the Chautauqua Institution (a place to visit in its own right) because I would have been too tempted.  But I did not say "no" to spending some bucks on candy to share!

Charming, right????  The "T" shape, the points, the coves.... little harbors. A lot can happen in a little harbor, let me tell you, LOL! Isn't this beautiful? And the colors were at peak in the Southern Tier of NYS this weekend. Just stinkin' gorgeous. The hills were flaming. Amazing.

Here's a shot from the Lakeview Bed and Breakfast:

And then we headed to Cuba Lake, on the border of Allegany and Cattaraugus Counties: 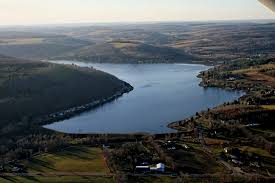 This is what it looked like yesterday, the colors, the hills.... it's a man-made lake nestled just above I-86 and tucked into its own corner of the world. How pretty is this????

So that was my weekend! Exploring... eating. Maybe a lot of eating.  We discovered how nice Jamestown is , and the set up provided me with GREAT IDEAS.... :)

And the people were so nice.  We ate at the Hometown Grill on Saturday night:

Delicious.... great server, April!  And fun, even though the Yankees had just suffered defeat at the hands of those tenacious Blue Jays in Toronto!

Great weekend, now working on applying what I saw/learned to this new series. And loving it!
Posted by Ruth Logan Herne at 5:45 AM