It's no secret that I'm a Yankees fan.
And a Jeter fan.
Lawyer Boy invited Dave and me to the Big Apple for Old Timers' Day.
I have always wanted to go to Old Timers Day.
See legends of baseball.
S-W-E-E-T!!!

Bob Sheppard, "The Voice of Yankee Stadium"
passed away last week at the age of 99.
And yet, despite his age, he will be forever young.
And wise.
A sage. A gentle man. 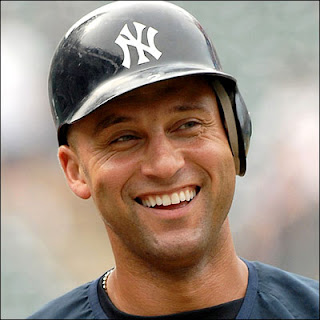 Derek Jeter has a clause in his contract that says
as long as he's a Yankee, he'll be announced
by Bob Sheppard. There's something intrinsically
awesome about the way Bob says:
"Now batting for the New York Yankees, playing shortstop,
number two, Derek Jetah. Number two." 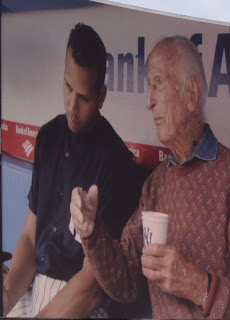 Bob with a younger A-Rod... Bob often came to the dugout
to chat with players. He loved baseball. He often said, "Some people go to work. I go to a game."
Genteel. Precise. Concise. Correct. 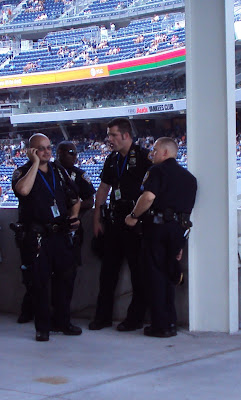 I love the NYPD. We saw patrols, beat cops,
stadium security, and had the privilege to chat with
a security detail at the Federal Reserve on Maiden Lane.
The love of New York, its people, its sports.
Of course I asked him to keep an eye on Zach for me.
He assured me he would.
Wink, wink... 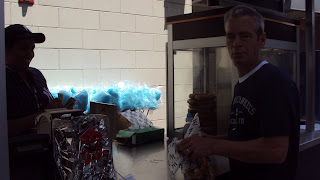 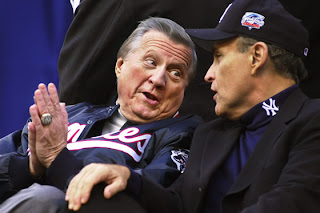 George Steinbrenner and Rudy Giuliani.
The tribute to George on Friday night was
amazing.
And I forgot my camera because we were late getting
into the city.
Dagnabbit.
But it was truly wonderful. Yeah, I know what you think.
How lovable could he have been?
But for all his tough-guy ways, he was a man
who liked to win and could laugh at himself.
He expected people to do their best.
Sometimes he expected that loudly.
But doing your best is never a bad concept.
George Steinbrenner.
Bob Sheppard.
We're gonna miss you guys.
Posted by Ruth Logan Herne at 8:32 AM